The game is turn-based. Each player acts after the previous player finished his/her actions. When all the players take their turns, the circle will restart again from the first player. The game will stop when one of the players achieved the game goal – if his or her opponent's life point drops to 0. In the game, there are three kinds of cards: Avatar Card, Magic Card and Trap Card. The following table explains their definitions, effects, and attributes.

The following figure shows a five-star card – Silver Dragon. It has 30 Health Points and have very high Attacking Power (i.e., 15) and its Defending is also high enough (i.e., 7) when it is placed as defending position (please note that a card can not attack while at defending position; on the other hand, it can not defend itself while at attacking position). Silver Dragon is extra large (XL) which means its dead will make its player lose a lot of life points. As a dragon can fly, doesn't like most of Avatar cars, its attacking range is 2. 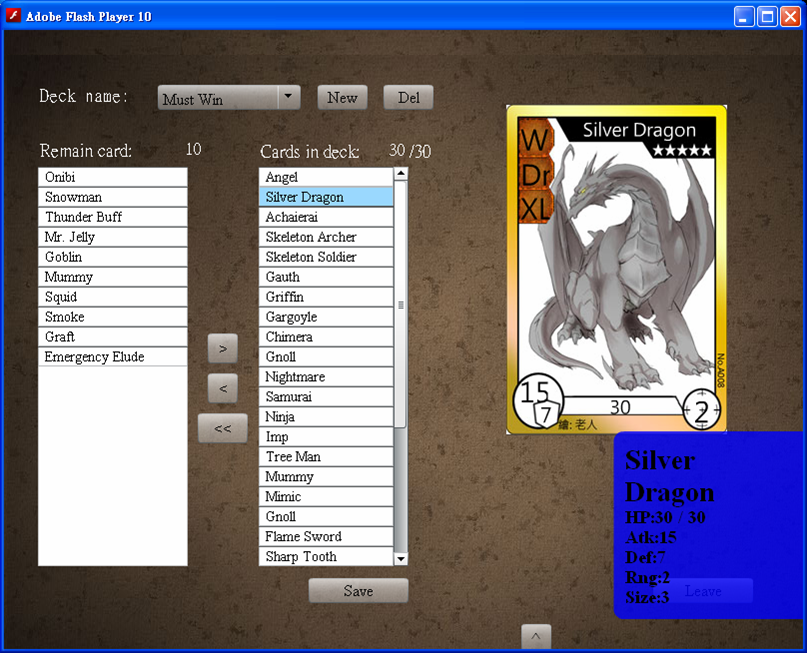 The following figure shows the game field, which has two sides for two players (and the game allows two additional players to join a combat as audience). Each side has four areas: Hand (H), Deck (D), Graveyard (G), and Field where two kinds of cards, Avatar Card (A) and Tool Card (T), can be placed.

Each player can place his/her Avatar Card into one of six places which are presented in three rows; the first row contains Ap1; the second row contains Ap2 and A p3 ; and the third row contains Ap4, Ap5 and Ap6. Each row makes a sense of 'distance' to the others. Therefore, if an Avatar Card's 'attack range' is shorter than the distance between it and its target, the player must 'move' it first to make it closer to its target (but, the player can never move or put his/her Avatar Card into the opponent's game field of course).

At the beginning of the game, each player has certain life points (depends on the combat room settings that players did earlier), 30 cards in the Deck and can draw 6 cards from the Deck as the preparation. The goal is to reduce opponent's life points to be zero. On the other hand, if the opponent runs out of his/her cards in the Deck area, the player will also win the game. After both players get ready to start, one of the two players begins his/her first turn. Each player has 3 Action Points (APs) to spend for taking actions. When a player completed his/her turn (i.e., can not do anything further), he or she should click on the End Turn button and allows his/her opponent to play.

The following figure shows the real game field. We can see the two players are maiga and eric. It is the 3rd turn of their combat. They both have 5 life points. It is eric's turn, so he has 3 Action Points and he is now checking the cards he has in hands. Archaierai is a large card and has enough Health Points and its attacking power is also not bad. 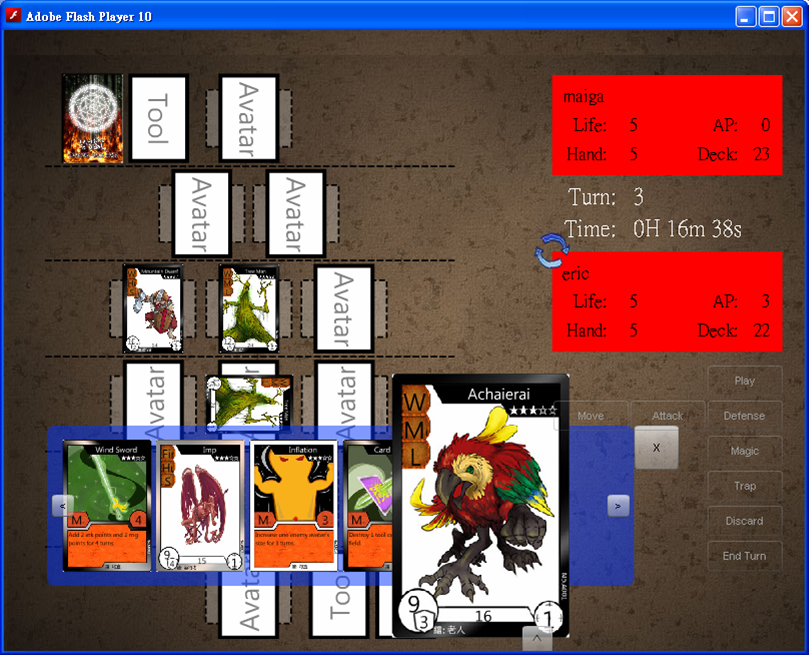